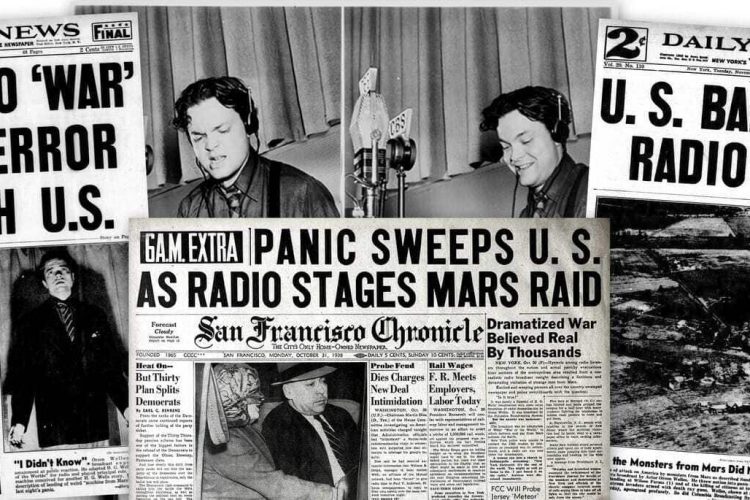 What’s Halloween and sci-fi radio without War of the Worlds? On Halloween, 81 years after the first broadcast on the air, the classic Mercury Theater on the Air production of H.G. Welles’ War of the Worlds is coming to SCIFI.radio. Listen for it today at 7pm Pacific / 10 pm Easter today, October 31.

This landmark radio program first aired on Sunday, October 30, 1938 over the Columbia Broadcasting System radio network. Directed and narrated by Orson Welles, it caused widespread panic. Perhaps as many as a million radio listeners believed that a real Martian invasion was underway. Panic broke out across the country. In New Jersey, terrified civilians jammed highways seeking to escape the alien marauders. People begged police for gas masks to save them from the toxic gas and asked electric companies to turn off the power so that the Martians wouldn’t see their lights. One woman ran into an Indianapolis church where evening services were being held and yelled, “New York has been destroyed! It’s the end of the world! Go home and prepare to die!”

When news of the real-life panic leaked into the CBS studio, Welles went on the air as himself to remind listeners that it was just fiction. There were rumors that the show caused suicides, but none were ever confirmed. None the less, the show proved conclusively the power of the media, and in the days that followed, there was widespread outrage in the media. The program’s news-bulletin format was described as deceptive by some newspapers and public figures, leading to an outcry against the perpetrators of the broadcast and calls for regulation by the Federal Communications Commission.

We hope you enjoy this special presentation. After all, SCIFI.radio is sci-fi for your Wifi.

Review – ‘Child’s Play’: A New Friend for a New Age

After 41 Years, “Emmet Otter’s Jug-Band Christmas” Debuts on the Big Screen AND on CD