Scottish actor David Tennant, best known for playing the Tenth Doctor on long-running British SF show Doctor Who will be starring in the latest adaptation of Jules Verne’s Around the World in 80 Days as Phileas Fogg for European television.  The production will will be an eight part series and is scheduled to begin filming in February 2020, with the intent to broadcast in late 2020.

Executive producer Simon Crawford Collins said, “We are thrilled to have such a talent as David to play this modern take on the iconic role of Phileas Fogg.”  Tennant most recently thrilled viewers as the demon Crowley in Good Omens, based on the book by Neil Gaiman and the late Sir Terry Pratchett.  Up-and-coming French actor Ibrahim Koma will play Fogg’s valet, Passepartout.  Koma is little-known in the USA, but well-respected in France for roles in Le crocodile du Botswana, Je suis daddy, Mother is wrong, Central nuit, Sous le soleil, and over twenty other movies and TV shows.  German actress Leonie Benesch (The White Ribbon, The Crown, and Spy City) will portray journalist Abigail Fix, who will apparently replace the Indian widow Aouda, whom Fogg rescued from suttee, as Fogg’s love interest.  (In the original 1873 novel, Fix was the name of the Scotland Yard detective who mistook Fogg for a bank robber and pursued him across the globe.)

David Tennant also played Barty Crouch, Jr. in Harry Potter and the Goblet of Fire, DI Alec Hardy in Broadchurch, the voice of Scrooge McDuck in the reboot of DuckTales, and Kilgrave in Jessica Jones.  Tennant was named the U.K.’s hardest working actor in a survey administered by the streaming service Britbox.

“Jules Verne’s most well-known and well-loved novel is coming to life again thanks to a brilliant trio of European actors, led by the great David Tennant. Having such an incredible cast obviously has us thrilled to produce and distribute (with our partner Slim) the first major family series presented by the Alliance of top European broadcasters (FTV/ZDF/RAI).”

Around the World in Eighty Days is a Slim Film + Television and Federation co-production with additional co-production partners, Palladium Pictures in South Africa, and Daro Film, associate producer. France Télévisions introduced the project to their Alliance broadcasting partners; Germany’s ZDF and Italy’s RAI. Seven West Media are also backing the production and are broadcasting the drama in Australia. Federation Entertainment will handle distribution rights to the series.

Ashley Pharoah (Life on Mars) and Caleb Ranson (Heartless) are leading a team of writers on the international drama,” transforming Verne’s classic adventure novel into an eight-part mini-series, which will debut on European television, and eventually come to the USA.  Steve Barron (The Durrells, Treasure Island, Dreamkeeper) will be lead director. Charles Beeson (The Mentalist, Supernatural) will also direct some episodes. Lionel Uzan (The Tall Man, Undercover, Unit 42) will be joining Simon Crawford Collins and Pascal Breton as a producer.

We’re always interested in hearing from our fans. Sound off in the comments section below. Your opinions are important to us.

And of course, if you like what you just read, please consider contributing to our Patreon campaign. It’s how we keep the lights on and our writers paid. – ed. 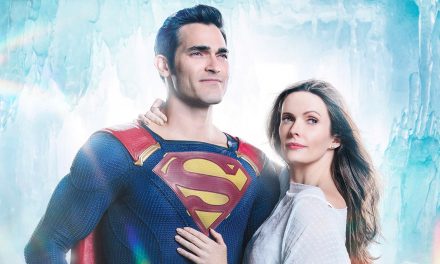 ‘Superman & Lois’ Come Back to Smallville in Epic New Trailer

Earth finally fills up completely with used Keurig cups who are friendly but incomprehensible and can be destroyed by a nuclear bomb .
The End.
Loading Comments...
%d bloggers like this: