Big Finish Audio Review: ‘Doctor Who: Out of Time’ 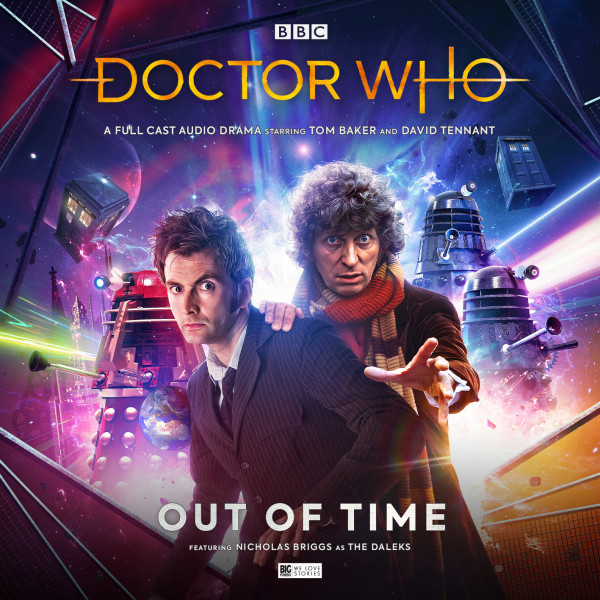 Finally, the release everyone has waited for. The Most popular new series Doctor, the Tenth (David Tennant), meets the most popular Classic Doctor, the Fourth (Tom Baker).

The plot revolves around the Tenth Doctor visiting The Cathedral of Contemplation, a get away for the universe weary traveller. It handily sits outside space time, so you can visit as many times as you like and never fear bumping into yourself. Unfortunately after the Tenth Doctor decides to peer behind the certain, he ends up face to scarf with his Fourth incarnation. The resulting disturbance allows the Daleks to attack and if they gain control of the Cathedral, then all is lost.

This story waists no time getting into the action and building an instant chemistry with the two Doctor’s. Nicolas Briggs, who directs as well as voicing the Daleks, comments in the extra’s that is was Tom Baker’s suggestion, that the Forth Doctor be kinder to his future self. A wise choice. The Doctor’s do spar a bit, but what sets this apart from most Doctor meet ups is that there is more of a kinship throughout. They each have their moments separately, but if anything we see concern from the Fourth Doctor to the Tenth, who is from near the end of his journey and in somewhat of a dark place. There is also a great deal of joy as the two back and forth whilst running rings around the Daleks.

The Daleks themselves, as the Doctor’s most popular villains, do seem like a natural choice for the enemy of the piece, however I found there reason for involvement a little underwhelming. Of course the performance by Briggs is wonderful, but I didn’t get much of a story from them, it seems to be more a case of the Daleks just doing what they do and happening to have chanced upon this very important cathedral whilst its defences are down.

At the end of the day the script by Matt Fitton is very tight for the Doctor’s, the guest cast and the Daleks as characters, but it feels like the reasons for the Daleks being there just felt a little underdone. I am good with character piece with a good setting however and this story delivers that. Neither Baker nor Tennant waste a joyful moment of this monumentous meet up.

Buy it now on CD or digital here.

Earth is targeted by a previously undiscovered asteroid storm who perceive us only as a food and can be destroyed by a nuclear bomb .
The End.
Loading Comments...
%d bloggers like this: