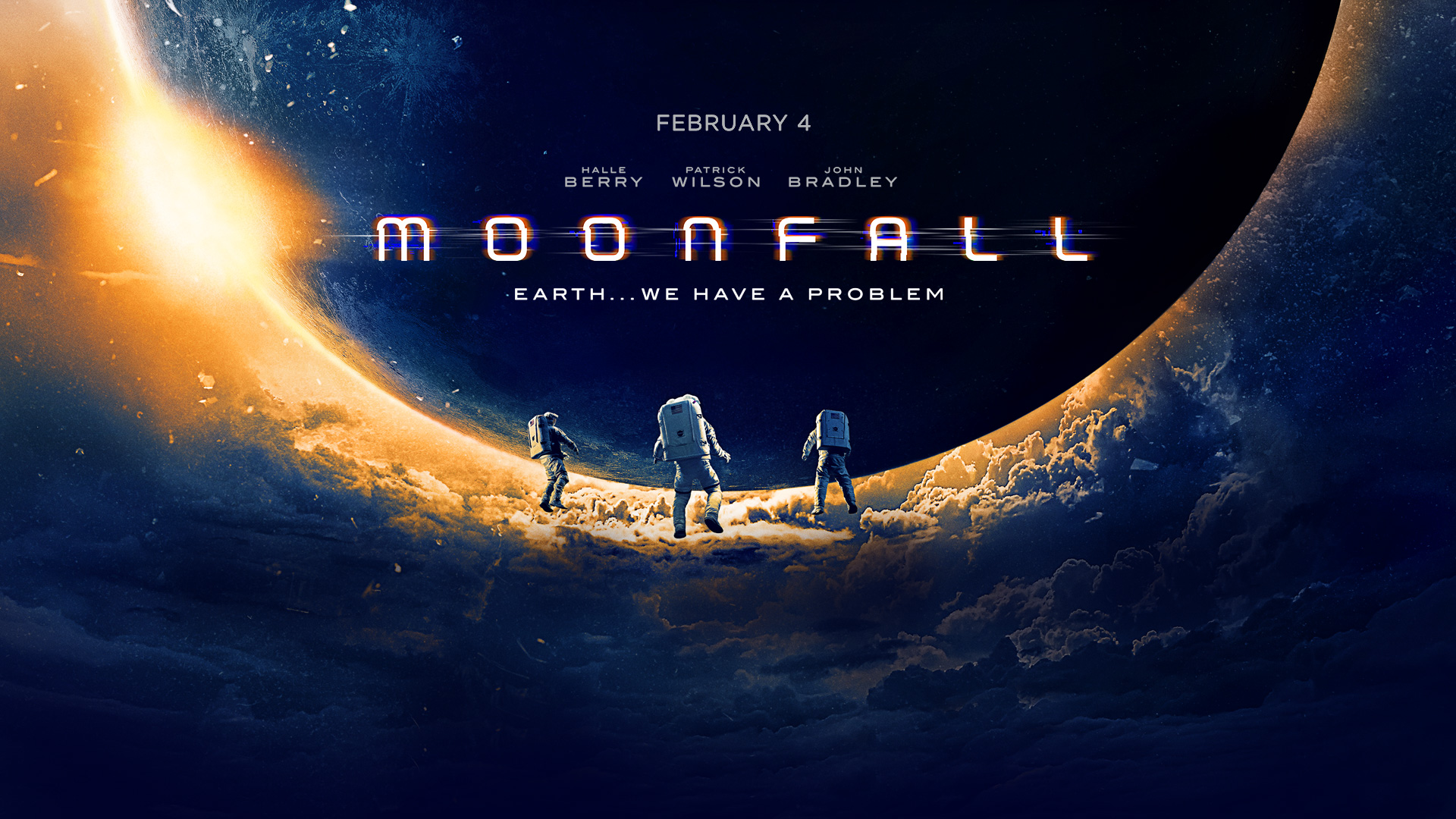 The late 90s and early 2000s was filled with epic, over-the-top disaster movies focusing on all methods of world-ending cataclysmic events. Alien invasions as seen in Independence Day, set on destroying all humans and snatching our planet’s remaining resources, global warming resulting in floods and freezing temperatures, even threats of asteroids crashing into the earth. While many of these movies were ridiculous and epic at times, they all focused on a singular threat facing humankind and a group of ordinary (yet somehow extraordinary) people to save the planet and ourselves. Moonfall attempts to take another stab at the formula that made these movies famous (even infamous) resulting in some mixed and head-scratching results.

Moonfall, directed by Roland Emmerich, stars Halle Berry and Patrick Wilson as a pair of NASA astronauts that are attacked by a strange mechanical swarm while performing a routine satellite repair mission from the space shuttle Endeavor in the mid-1990s. The attack resulted in the death of one of the crew members and severely damaged the shuttle. Brian Harper (Wilson) and Jo Fowler (Berry) successfully return the shuttle to earth only to see Harper take the fall for the death of his crewman and the fall guy for a coverup to prevent the citizens of earth from truly understanding what they encountered.

Fast forward to current day and a “crazy” conspiracy theorist K.C Houseman, believing the moon to be a megastructure built by aliens, discovers that the moon’s orbit is rapidly eroding. He attempts to reach out to NASA and after several unsuccessful attempts releases his findings via social media. The top minds at NASA confirm what has been identified and estimate that they have only three weeks to execute a plan to prevent the moon from crashing into the earth destroying everything and everyone. The race for the survival of the planet is quickly on which will focus on not only the NASA “team”, but each of their family members.

Let me get this out of the way first, I personally loved many of Roland Emmerich’s wildly outlandish films. I thought Independence Day was fantastic, and even though many found The Day After Tomorrow a bit to preachy and ridiculous, I still found it entertaining for what it was. So, I was excited going into Moonfall. I was ready for a fun movie that I felt would be a mindless, fun adventure which was something I had really missed in many of the movies that had come out over the past year or two. Unfortunately, my aspirations (and even the low bar I had set my expectations for) would be quickly dashed.

Moonfall is a movie that struggles throughout to find an identity. I found myself instantly comparing several of Emmerich’s films during its roughly two-hour run time. At times its reminiscent of Independence Day, with its alien destruction of earth storyline, and then quickly jumps to a disaster film about the moon crashing into the earth. It’s as though Emmerich took pages of several of his previous films and cobbled them together into some sort of Frankenstein’s monster. There are so many plots and subplots going on that you never truly know what the main threat is. It touches on everything from the birth of humanity to the overly aggressive military, to the dumbing down of NASA all at the same time. With the exception of our heroes (and of course their entire families, because why not), everyone else is just resigned to the fact that nothing can be done. Riots of course breakout, the military is quick to decide to nuke the moon is somehow going to save the planet, and no level of crazy plan is off the table.

I’m happy to forgive an outrageous plot if the actors are able to pull it off with some semblance of believability. I know none of the actions have any real-world chance of success, and I can forgive plot holes for the sake of entertainment. Unfortunately, the acting is where Moonfall really lets the audience down. Each character is portrayed in a completely over-the-top fashion, it reminded me of watching a movie that is intentionally attempting to spoof another movie. The emotions are not believable, and the lines being delivered are literally derived from popular lines of other movies. Bonus points if you can identify which movie they are from as the film progresses. The saddest part is, this movie is trying to take itself seriously, it’s not intentionally being campy, for the sake of being campy. I think the character portrayals could have been forgiven if that was the case, but it’s clearly not. It’s actually a distraction when the story of a film is already struggling to deliver.

The movie effects go from truly spectacular, to overly CGI-infused. Ironically the space shots, which you think would be the hardest to pull off are some of its best, yet the vehicle driving scenes through the snow-covered townscape are some of the worst. It’s almost as though they spent so much of their budget on the space scenes that they had no money for the earth shots, which would be fine if they didn’t literally look so bad. It’s jarring going from one area to another and makes for a very inconsistent experience the entire time.

I believe one of the biggest tragedies of the film however is the absolutely blatant product placement. Yes, I understand that product placement has sadly been a staple in the film industry since the dawn of time. Yes, I understand that when someone is using a MacBook on-screen or riding a Peloton, it’s there for a reason. Moonfall however takes this to a Hallmark movie level. If you watch a Hallmark movie sponsored by Folgers for example, there will be clear shots of the Folgers coffee on the counter, with the cast explaining how much they love Folgers’s coffee, Moonfall utilizes this very trope. Kaspersky Anti-Virus is plastered on everything, even the Space Shuttle is protected with Kaspersky Anti-virus (which some might argue has other implications, but I won’t go there), and while avoiding looters driving through the snow-packed roads, do we really need the character to explain the need for the off-road settings on their Lexus? Talking about it is one thing, but do we really need to see the dial up-close and personal? It quickly takes you from the scene to a Lexus Christmas commercial and back again.

Sadly, Moonfall is a very disappointing film. If it were released in 1998 maybe it would be a super hit and I’d feel differently about it, but the industry has moved on since then. I had gone in knowing the film wouldn’t be realistic, but I was hoping it would at least be a nice escape from what is going on in the world today. As I have stated before, I’m a huge fan of Emmerich’s films, and while Moonfall may not be his absolute worst, it is one that will quickly be forgotten. I don’t even know if it’s one I’d revisit if it premiered on HBO or Showtime. As excited as I was, I just wouldn’t be able to recommend it 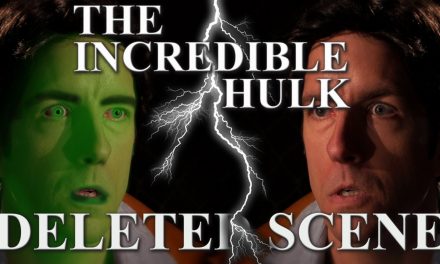 Video of the Day: Rare Deleted Scene from ‘The Incredible Hulk’ 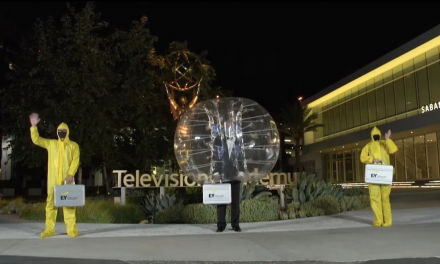 The 2020 Emmy PrimeTime and Creative Awards – All Winners 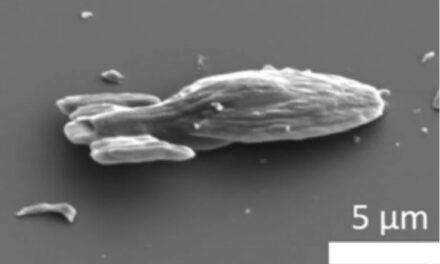