A Monument for Félicette, the Astrocat, First Cat in Space 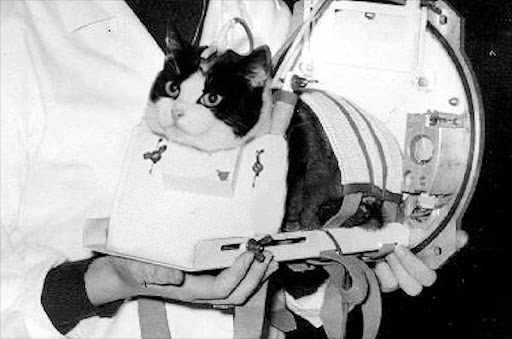 Most science fiction fans are also fans of the space exploration in real life, yet few of us have heard of Félicette, the French feline astronaut.  Félicette was the living payload of a French Veronique AGI sounding rocket on October 18, 1963, and the first cat in space.

Matthew Serge Guy wanted to make sure the former stray cat was remembered, so he launched a Kickstarter campaign to get her a bronze statue at the International Space University in Strasbourg, France. The campaign to preserve Félicette’s well deserved place in history was launched on Kickstarter in October 2017. More than 1,100 people raised $57,000 for her statue.

The bronze statue, by sculptor Gill Parker, is five feet tall, and shows Félicette perched atop the Earth, gazing up at the skies. The Smithsonian Magazine reported that  the statue “premiered on December 18, 2019, as a part of the 25th anniversary celebration of the International Space University’s Master of Space Studies program.”

Félicette, a tuxedo cat, official designation C341, was launched from a base in the Sahara Desert October 18, 1963. During a fifteen minute space flight, she reached an altitude of about 100 miles above Earth in a suborbital mission. French scientists monitored her breathing and heart rate during the mission to predict how space flight would affect human astronauts. Of course, by 1963, Yuri Gagarin and Alan Shepard had already been in space, but scientists had little information what the long-term effects of reduced gravity on humans would be.

By 21st century standards, many people consider such experimentation animal cruelty, but in the mid 20th century, experimenting on animals before humans was considered a sensible precaution.

A few months after her return to Earth, she was euthanized so scientists could study her brain, to see if or how it had been affected by her fifteen minutes in space. Like Russia’s cosmonaut dog Laika, and the American astronaut monkeys Able and Miss Baker, Félicitte deserves to be remembered.

“It’s crazy to think a video I put online almost two and a half years ago has resulted in this,” Guy wrote in a Kickstarter update. “The internet’s an alright place sometimes.”

Video of the Day: “Autonomous”

Will NASA Use Astronauts’ Urine To Build Our Moonbase?

Human in Robotic Exoskeleton to Kick off FIFA World Cup