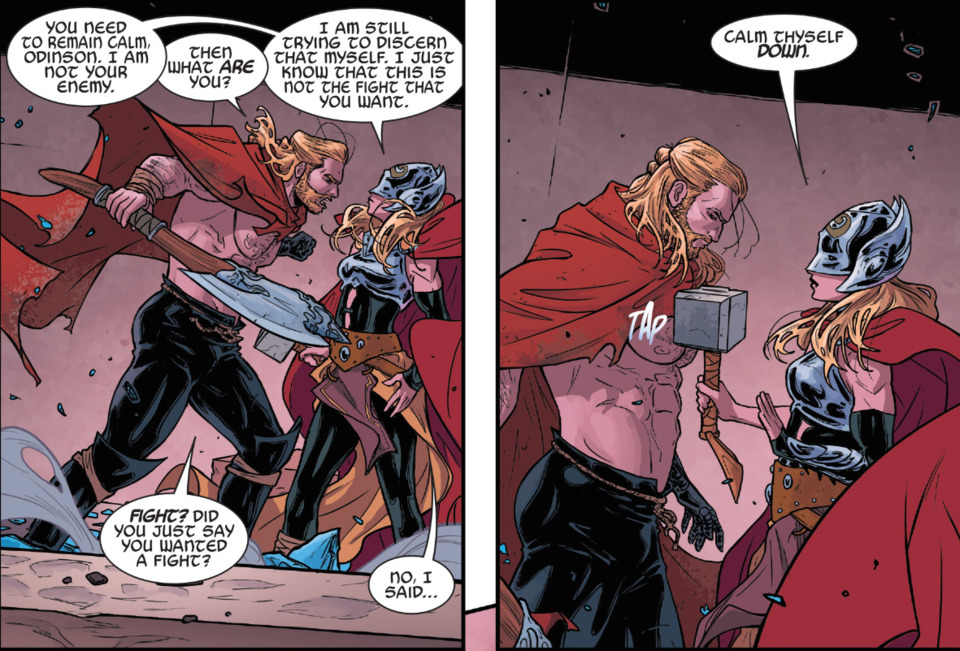 Natalie Portman has portrayed Jane Foster to Chris Hemsworth’s Thor in the movies, and at San Diego Comic-Con 2019 she was declared as the new Thor in Thor: Love and Thunder, due out from Marvel Studios on November 5, 2021.

She is described by director Taika Waititi not as “female Thor” or “Lady Thor”, but simply “The Mighty Thor” – but if you thought only Odinson could be Thor, there is more to the story.

The Power of Thor

The power of Thor comes in two varieties. The primary flavor we are most familiar with is that of Thor, son of Odin.

Born of the Elder goddess Jord and Odin Borson, he is a fusion which embodies the best of his parentage. Superhuman capacity, durability and immeasurable strength.

He is a god for a new generation of Asgardians. Odin created Thor as a potential successor since he realized he would not be able to channel the power of the Odinforce forever and needed an heir who might release the Asgardians from being preyed up by Those Who Sit Above in Shadow; eldritch parasites/godlike beings who fed upon the destructive energies of each fall and rebirth of the Asgardian deities.

Odin’s ultimate goal for Thor was to break the cycle and free Asgard from their dominance.

But realizing that Ragnaroks would continue to happen, Odin built a failsafe into Thor’s legendary weapon, Mjolnir, creating the potential for:

“Whosoever holds this hammer, if he be worthy, shall possess the power of Thor.”

The hammer has the capacity to empower any being who is worthy (in Odin or the hammer’s perspective, we are not sure which or why) they shall be imbued with superhuman capacity nearly equal to that of the Odinson.

This power is an aspect of the Odinforce and was built into the hammer.

What is the power of Thor?

Each worthy person gains most of the powers of the Odinson because Odin wanted it that way. Thors die. Asgard is forever. Asgard must have a Thor. The empowered gain vast superhuman strength (their body is fortified with the Odinforce) and they also gain Thor’s power over the elements, lightning and the energy manipulation powers of Mjolnir.

Much of this history is recounted over the decades of Thor comics but has been highlighted recently with the addition of the Lady Jane Foster who has become the latest Worthy to lift and wield Mjolnir.

Who is the Lady Thor?

In the Mighty Thor series, Thor has become unworthy after having doubt as to whether the gods were truly significant, meaningful or even mattered in the overall scheme of things. His doubt, engendered by Old Nick Fury, made him unable to pick up or use Mjolnir and it lay on the moon, unable to be moved by anyone. (Even Odin.)

It’s unclear how Jane Foster gets to the moon, but it is believed the All-Mother made passage to the Moon to let Jane Foster become Thor.

For a time, no one knew who the female Thor was, but eventually it was revealed the Lady Jane Foster, who was once betrothed to Thor Odinson in the distant past (60s and 70s in our time) before breaking it off with him.

Now, after the Fall of Asgard and the relocation of the Asgardians to the Earth Dimension, Jane Foster became embroiled in Asgardian politics both as a senator of Midgard and as the mysterious Lady Thor. (She preferred to just be called Thor … as a title or honorific.)

Thor Odinson, just became the Odinson, feeling unworthy of the title of Thor. (Yes, we know that “Thor” is supposed to be his name, not his title, but this isn’t Bullfinch’s mythology, it’s Jack Kirby and Stan Lee’s.)

As the empowered Thor, Jane Foster’s run on the Mighty Thor had her face a host of threats from across the cosmos and she acquits herself with style, panache and a whole lot of attitude, fighting ROXXON, its hidden power brokers, Malekith, who is waging war across the Nine Realms, and even facing Odin on more than one occasion.

The Odinson and the Lady Thor come to an accommodation once he realized, no matter how he felt about her using Mjolnir, that ultimately the hammer decided she was worthy, even if Odin and Thor or every other Asgardian everywhere didn’t like it.

Lady Jane’s tenure as a senator and as Thor was relatively brief by comic standards but a meteoric rise as she goes out fighting against the hordes of Malekith’s army, the threat of the War Thor (a being comprised of the Earth-1610’s hammer and Volstagg the Voluminous.)

She lays down her life in a battle against the Mangog, who had defeated Heimdall, Odin, and the Odinson and was driving Asgardia (the new home of the Asgardians) into the Sun. In the battle, Mjolnir is destroyed. The Mangog is defeated and Jane Foster’s Thor dies.

Jane Foster was ridiculed as Thor by angry fans who thought it was a ridiculous idea. But the writers impressed me by their thoughtful storytelling, their amazing characters, their political acumen regarding the Asgardians, their epic myth-making (even when I didn’t always agree with it) and their ending to this outstanding story.

Jane Foster was Thor. That she was worthy goes without saying. She fought like a god, went out like a boss and told Odin where he could shove his attitude.

I never loved her more. She was more than Thor’s girlfriend, more than Thor’s fiancé, more than Midgard’s senator. While she was dying of cancer, she choose to protect the world, sacrificing what life she could have had to remind the gods of their obligations to the Universe.

You don’t like the run? That’s fine – but Jane Foster embodied everything Thor has been missing for a while and I found it absolutely delightful.

Jane Foster was Thor. Don’t you ever forget it.

More on the Empowered Thor – The Answer Man on Quora. 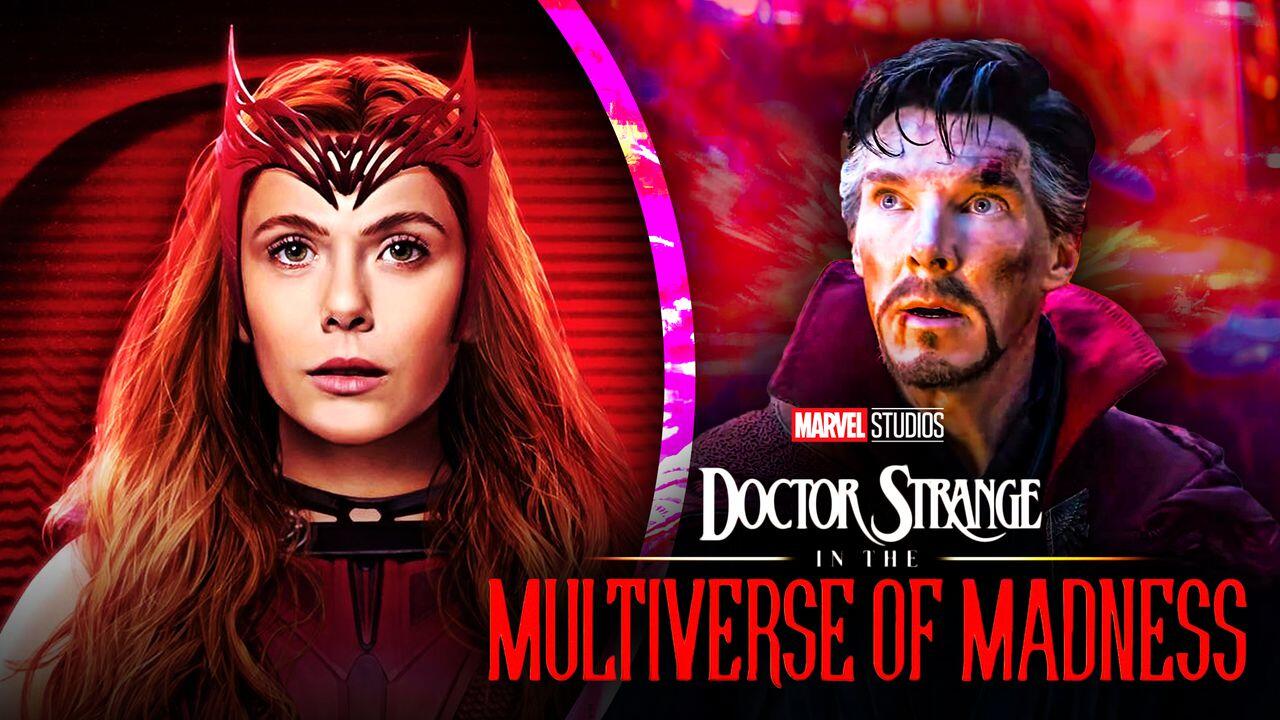