I didn’t bury the lead. Steve Dikto, one of the foundations of the current Marvel Universe, a forgotten titan, a master of magic, a spinner of webs, with vision as far as the eye could see, has past beyond Eternity’s reach. Steve left us at the age of 90.

Not much to tell you don’t already know, so I am going to tell you a story you don’t know:  the strange story about my rediscovery of Steve Ditko.

The Universe didn’t want this story told. On the day I got the assignment, I was driving (I am an Uber driver sometimes, so my epiphanies often happen behind the wheel) and I talked to my boss, I had a whole lot of ideas of what I wanted to talk about.

Steve is relatively unknown to most of the modern readers of comics, unless they have managed to stumble across a copy of Strange Tales withering in a basement somewhere, Ditko’s name is rarely invoked, even while people consume the timeless quality of his creativity without ever knowing it.

The fact is that many of Marvel’s early creators such as Dikto created work-for-hire, and as such anything they created for Marvel back then meant it belonged to Marvel and the creator would never know any further income from the work, no matter how it was transformed, revised, expanded, or turned into a blockbusting movie making billions and billions and billions of dollars.

That those creators are usually never compensated again, no matter how much money gets made, is wrong. So many of these early creators, these unsung heroes, who created something which became fabulous, would still die broke, without even the most basic amenities of life, while executives who lack the creativity of plaster of Paris, rake in the billions from their exploitation of greater minds.

I understood how such exploitation get done. I know it’s pure greed. But most importantly, I realized it was the secretly the death knell for the Big Two’s creativity.

You see, people like Steve Ditko created because they loved doing it. He created freely, with the hope that his creations would live independently of him. Steve’s creativity was the kind of thing which didn’t just appear or simply exist.

Steve’s designs inspired — when they didn’t mock, or when there wasn’t a secondary meaning in something he created. Steve was a layers kind of creator. In his portrayal of Spider-Man’s foes, he brought to life, the Everyman villain — not a mastermind, sometimes a genius, sometimes a doofus. Usually just that guy up the street, late with his rent. Electro was Max Dillon, electrical worker. Just a regular Joe.

Steve’s signature design on Spider-Man’s costume has morphed over the ages, but has rarely been improved upon. And even all these years later, Spidey’s red and blue has remained as iconic as many other Ditko’s designs.

And this leads me to the crux of the problem.

When creators like Ditko are taken for granted, when they are not seen as the visionaries they are, they wither. They revert into themselves. They lose the faith. They falter. Sometimes they get back up, wading back into the battle. But if they are too far ahead of their time, with ideas too strange for the world they live in, they are mistaken for kooks, birds too unusual to be around.

Steve Ditko was such a fellow. Creative to a fault, his iconic works survived his relatively brief stint at Marvel. Spider-Man’s classic costume, the immortalized cape, costume and accoutrement of the magnificent Doctor Strange.

He would create a number of Spider-Man’s most iconic rogues, foes who would appear again and again, as famous in their way as Spider-Man: The Vulture, Dr. Otto Octavius, Sandman, Dr. Curt Conners (the Lizard), Electro, Mysterio, Green Goblin, Molten Man, The Tinkerer and the Jackal.

And to be fair, he created other heroes outside of Marvel. He helped bring into being DC’s Captain Atom, Ted Kord’s Blue Beetle, the other laughing madman of the DC Universe, the Creeper, Shade, the Changing Man and everyone’s faceless conspiracy theorist, the Question.

I wanted to tell you Ditko’s passion was the ordinary man, the man who rose up through dint of effort to challenge a hostile Universe.

It was Steve’s story and despite his early success, he would never enjoy the fame his creations deserved. He fell from sight, making few appearances and working on a variety of smaller projects, like Mister A, a character based in Ayn Rand’s objectivism, an extreme character whose ideals were literally black and white. Mister A is the Question, if he were able to be R-Rated.

It was a shame that when the Question became part of the Justice League on Cartoon Network, Ditko didn’t make any money. Before you begin your rants on the rights of companies to do work-for-hire and talk about they were fairly paid for their efforts at the time and no company should be expected to pay them again when the medium changes, let me remind you that the creative act is a singular one, not a commodity that comes out of a box. That’s somebody’s soul they’re selling you.

Which would then lead me to the idea that creators have rights now. They don’t want to do work-for-hire unless its with already existing characters. No one wants to create anything now unless they can get a piece of the action.

Good. The side effect of this renewed opportunity is the Big Two’s inability to create anything new. At the very same time new comic companies were popping up like daisies, the Big Two had become moribund, recycling their golden age and silver age heroes again, unable to even create an effective second generation of those heroes.

The last thirty years has been rehashing, re-warming, stir-frying their same old lineup of characters, hoping for something, a new perspective, a new recombination, a chance for a spark of something which would appease the creation of something new, which neither company has managed to do since the early ninety’s, once writers started getting hip.

Those same creatives who made them great were also the last time anyone in those companies created anything new. Anything inspirational. Anything with vision, anything with longevity. I can name the handful of new creations since 1996 that are still in play, well liked, and have a following. Yep. Deadpool.

I wanted to tell you all of this: but the Universe would not let me. Seriously. The next morning after I got the assignment, there was a power outage in my neighborhood. Power didn’t return for hours. When it did, I sat down to a computer which no longer worked. The surge protector may have only done half its job. The computer survived, but the hard drive didn’t.

Jesus saves. So does Thaddeus. Restoring my drive took a bit longer than I was happy with but when I was done, I realized it was almost time for my wife and son to head off to Japan for their first visit to my favorite island nation. The anxiety of dealing with sending them off and waiting nervously to land, distracted me further. Then I passed out for a day exhausted after being awake for two days, collapsing after I dealt with a plumbing issue.

But this whole time, I kept having the feeling I was missing a thread, something which would bring my ideas about Steve Ditko, an artist who defined my childhood. As a fan of Doctor Strange, Ditko’s strange was surreal, super-fantastic, and groovy all at the same time. But it was when I reread Strange Tales #138 that I realized what was missing.

The pages which made me a Ditko fan will follow. The scene when Doctor Strange enters the Eye of Agamotto, exploded my ten year old mind. A world within a world? It was too much.

Then Dikto too me on a magic carpet ride with his dimension hopping and to the meeting which forever made mine Marvel. Doctor Strange’s first meeting with the living personification of the entirety of the Marvel Universe.

Hold on. I just want you to sit with that for a second. This meeting would haunt me for years as I tried to understand what had happened: Doctor Strange left the Universe to be outside the Universe, to talk to the Universe. And it answered. Wooah!)

Steve, you gave us Eternity, a breathtaking vista, to a place beyond imagination. And he’s taken you back. The format of this story is different. Like Steve was, layered, complicated, unappreciated in his prime.

We didn’t deserve you. We didn’t tell you how much we loved you. We’re sorry, man. You were a bloody genius.

I was trying to tell you guys this all week. I’m glad you could wait.

A New Resistance for a New Age: First Look at ‘The Dark Crystal: Age of Resistance’

A Nobel Ending to ‘The Big Bang Theory’ 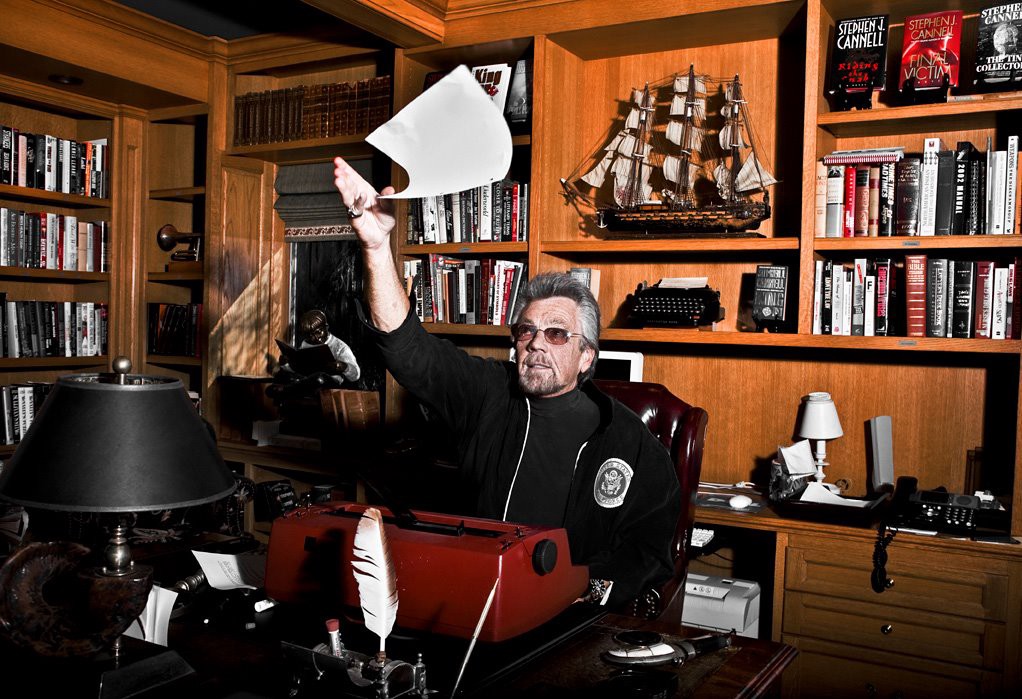 Stephen J.Cannell, Scriptwriter Extraordinaire, Would Have Been 81 Today