While the name Samuel F. “Ted” Dabney may be unfamiliar to many, if not for him, the video arcade industry would not be as vibrant as it is today.

Born May 15, 1937 in San Francisco, Dabney attended several schools, including John A. O’Connell High School of Technology, where he took trade drafting. However, it was while serving in the U.S. Marines that he started taking courses in electronics, giving him an interest in the area.

Below is an interview with Dabney from the Midwest Gaming Classic in 2011.

After working for a time for Bank of America, where he kept their Electronic Recording Machine Accounting (ERMA) operational, he began work at Hewlett-Packard, before joining Ampex in 1961, working in their military products section. He then became involved in video imagery products at Ampex. It was at Ampex, in 1969, that he began working with Nolan Bushnell. After seeing a computer at the Stanford Artificial Intelligence Laboratory, Bushnell came up with the idea for smaller computer systems, with coin slots in the side, so people could pay to play games.

In 1971, the two joined Nutting Associates and created the arcade game, Computer Space. In the game, a player controls a rocket, while firing at a pair of flying saucers. Although it was a commercial success, making over one million dollars, Nutting was disappointed, hoping the game would be a bigger hit than it was. Despite their disappointment, Nutting did create a two player version, and there was one single clone from a competitor in 1972, Star Trek.

In 1972, Bushnell and Dabney left Nutting and together incorporated Syzygy Entertainment. There, the two assisted Al Alcorn in creating Pong, using Dabney’s video circuit that was used for Computer Space, which became a huge hit, and led Dabney and Bushnell to form Atari. Dabney later left Atari after a falling out with Bushnell, but did assist Bushnell in helping start Pizza Time Theater, the predecessor to Chuck E. Cheese, as well as worked at Bushnell’s Catalyst Technologies as an employee.

He went on to work for other companies such as Raytheon and Fujitsu, as well as his own Syzygy Game Company, where games that he made were used at Pizza Time Theater. After Pizza Time Theater went out of business, Dabney shut down Syzygy Games and went to work for Teledyne. After ten years working there, Dabney left the technology industry and became manager of a grocery store, and later a deli.

In late 2017, Dabney was diagnosed with esophageal cancer. Given only a few months to live,  he opted against treatments. He passed away, May 26, 2018. 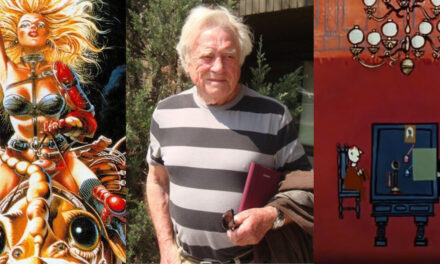 George A. Romero, Master of Modern Horror Movies, Dead at 77