“The Orville”: A More Complicated Conversation

I don’t hate it as much as I thought I would.

All things being equal, I should hate The Orville with a passion unparalleled.

Why? Because I simply loathe Seth McFarlane. Okay, I don’t necessarily mean the man, but I do despise his more famous products including Family Guy, American Dad, the Cleveland Show and his movie, Ted.

Clearly low-brow humor, sometimes racist, scatologically-inclined, and often cleverly violent humor does not appeal to me, personally. He and his writing teams do know the American mind and can write humor which caters to the national weaknesses flawlessly. How do I know this? I watch his shows and have from the beginning.

All these years later and I still don’t like them. What I will admit is his brand of humor has struck a chord with American viewers and like him or not, he’s not going anywhere. Being fair, I must say I know nothing about his music and I haven’t seen his tongue-in-cheek western: A Million Ways to Die in the West.

Thus when he said he was going to create a science fiction show, my mind went into the gutter. I though to myself: toilet jokes in space. Ugh.

I did not think he would channel the artistry of Galaxy Quest, which in my opinion, is a brilliant work poking fun at both the actors of Star Trek, and the entire space opera-esque genre of which the movie parodies relentlessly and perfectly, almost never missing a beat. Reading about the behind the scenes on Galaxy Quest makes me realize how lucky they were to produce a quality product given the challenges.

Galaxy Quest manages to mix the high adventure of space opera with the humor of a comic adventure movie without resorting to undermining the genre it parodies. In its way, it pays a homage to the genre complete with the understanding of just how stupid its tropes can appear.

I though it might be more along the lines of SpaceBalls which pays little respect to the genre, but has managed to secure a space in the hearts of fans because of its completely over the top delivery of its lampooning of Star Wars, complete with Dark Helmet and the power of the Schwartz.

What I feared was an attempt to try and approach the more cerebral humor of classic space opera humor of shows such as Red Dwarf. What I mean by cerebral is the idea of telling jokes which are not apparent necessarily AS jokes, but more insider references to British society. If you know the references, Red Dwarf makes sense and is funny, to YOU. It does quite a bit of slapstick, toilet and sexual innuendo in its routines as well, but it didn’t seem like a territory McFarlane would consider.

The other perspective I feared was an attempt to be serious with the stories but populate the story with either blatant sexual innuendo or terrible character parodies with an attempt to see just how much they could get away with like the Canadian-German production Lexx. Lexx was not serious science fiction, yet it was trying to tell a collection of stories which had serious, yet irreverent overtones. Again, this didn’t seem McFarlane’s lane.

What was McFarlane’s plan?

When the first episode of The Orville ended, I was perplexed. Given what I just wrote, which was what I thought before the show aired, he didn’t do any of these. I expected parody. I expected absurdity. This was a science fiction story which pointed out the absurdity of the nearly religious fervor of the Star Trek Universe.

THE ORVILLE: The crew of The Orville ©2017 Fox Broadcasting Co.

Wait, what? In comparison to most of his work, the humor was subtle, almost tasteful by comparison. But what drew my absolute attention was its resemblance to Star Trek: the Next Generation in lighting, in costuming, in set design and even in scripting. The differences are subtle, as well they should be, since Star Trek alum, Brannon Braga is one of its producers.

There was even an attempt at a serious story arc. McFarlane plays Captain Mercer, a man broken by his wife’s infidelity goes from being one of the Union’s best officers to a shell of himself. On the fast track to losing his job, he gets one last chance to redeem himself by taking command of a tiny reconnaissance vessel, the Orville.

What we get after this opening is the introduction to the ship, the crew and their first mission, a medical distress mission delivering goods and resources to a research planet.

What we got was an episode of Star Trek. With slightly out-of-context jokes, using modern language elements, but missing more localized slang. We met the crew and they are all what we might have expected to see from an episode of TNG with humorous subtexts spoken aloud.

The introduction of the first alien threat, the Krill. I liked the costume design; I hated the fact they were terrible shots…

I wanted to hate it. I did. Because there is currently no more Star Trek. Yes, I know about Discovery and its conceits at the moment don’t make me cotton to well to it either. But I found that, if I looked at it in the right light, it could be something other than Star Trek.

When the marital debate began to involve the Krill commander, it became stranger than Trek because it pointed out the similarities between the aliens and Humans with an overtone Trek never tried. An absurd one, at that. This made The Orville a new thing which happens to resemble an old thing that I loved. Which may be why I cut it slack that most media pundits didn’t.

Did it have flaws?

Oh, yes. There were plenty. The show failed at several levels including timing, pacing, inappropriate humor, and absolutely terrible fight scenes. The Krill (who names these enemy species, anyway?) must all have the visual capacity of fish because only out of twenty managed to get a hit on the crew. An incompetent enemy which may mean there may be other more capable ones hiding on the fringes of their interstellar territory. We just don’t know enough.

Why send two scout ships but no Union redshirts? This put the team in the unenviable position of having to fight their way out without casualties. This reduces the stakes and makes the enemy look incompetent.

“Hugging the Donkey?” Stupid name but interesting maneuver. Using a smaller ship’s increased maneuverability to stay outside of fields of fire is interesting but I couldn’t fathom why the Krill destroyer didn’t just move away. Perhaps they didn’t think the Orville was a threat, and it was just arrogance, but it felt like poor writing to me.

Or more importantly, why the Orville didn’t position itself near a more vulnerable point on the Krill vessel and shoot there … I wish the writing had been tighter, but there are far worst things on television to be upset about.

Was it AWFUL? No. Encounter at Farpoint was AWFUL. Most episodes with Wesley Crusher were awful. The first couple of seasons of Next Generation were awful.

Could it have been better? Absolutely. We don’t know much about this Union thus far but they have managed to have a quarter of the galaxy under their reach, with 3,000 ships at a variety of levels of capacity so they aren’t completely incompetent. But an enemy ship was able to penetrate their space easily so they haven’t got everything worked out yet.

The worst thing I can say about it, given its newness is: It’s not Star Trek.

And that’s not a bad thing. Despite the similarities between the two, perhaps it can take a different approach. We know very little about the Union, and perhaps we should give McFarlane a chance to rise and fail on his own despite starting from a place we feel very connected to. I have the same feeling I did when I first watched Next Generation and said out loud: “This ain’t Star Trek.” A litany I would repeat for at least two seasons.

Perhaps, unburdened by Gene Rodenberry’s legacy of a perfect Utopian ideal, The Orville can ask different questions. Perhaps it will show a Utopian future with different perspectives than the Federation did — one with a ship’s crew whose foibles and humor more resemble our own.

We need to give the writers the chance to find their way. Establish some guidelines, figure out their characters, write some decent arcs, get some better special effects. Please. Who knows, it may not be Star Trek but it might distinguish itself in some different and yet significant way.

I am happy it did not try especially hard to be funny, though it was sold that way. I think that would have been the worst thing it could have done. Comparisons to Galaxy Quest would have destroyed it. I know this much: the audience of Seth’s previous lineup of shows are probably not the audience for this one. Some might cross over but it remains to be seen who the target demographic could possibly be.  Sci-fi fans jonesing for the next thing? Comic drama buffs with a taste for adventure? Star Trek fans who don’t want to pay for CBS All Access accounts to get Discovery? Or some subset of people looking for something different?

Verdict: I liked it. It has a potential for greatness.

No matter who you are, I submit to you a “Welcome Aboard.” The Orville is a humorous space drama, complete with flawed characters, prosthetic aliens, with room-to-improve CGI.  It has the chance to tell stories and entertain us, and if we are lucky it will be evenly humorous, without being rude and obnoxious; giving Seth McFarlane the chance to do something that doesn’t completely depend on offending someone, somewhere for thirty to sixty minutes at a time.

The Orville – a reconnaissance vessel. Tiny, with three engine loops and a crew complement of about 150.

The Orville: Set 400 years in the future, the show follows the adventures of the Orville, a not-so-top-of-the-line exploratory ship in Earth’s interstellar Fleet. Facing cosmic challenges from without and within, this motley crew of space explorers will boldly go where no comedic drama has gone before. Produced by Fuzzy Door Productions and 20th Century Fox Television.

Editor’s note: the ratings for The Orville have come in, and the future for the new show is bright.  It reached 13 million viewers across all platforms, or an eye-popping 3.25 times the total viewership Star Trek: Discovery will have on the CBS All Access platform, assuming  that every single one of CBS’ subscribers watches the new Trek show. It’s the largest drama debut since Empire in 2015. The critics who panned The Orville had it hilariously wrong. 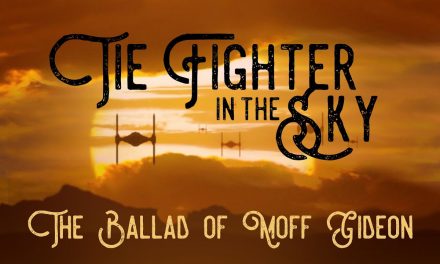 Video of the Day: Funk Turkey’s ‘TIE Fighter in the Sky: The Ballad of Moff Gideon’

Video of the Day: Bad Lip Reading Does “The Force Awakens” – With Mark Hamill!

Earth scientists discover huge insects who want to plug us into a power grid and use us as living batteries and can be destroyed by a nuclear bomb .
The End.
Loading Comments...
%d bloggers like this: