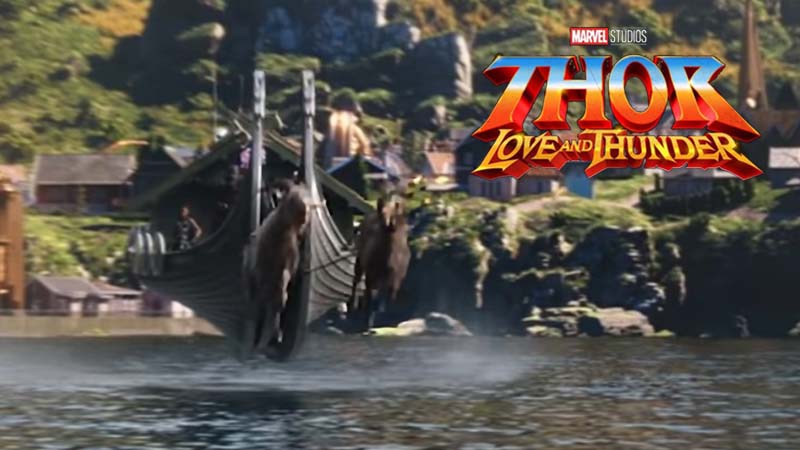 In the recent film about to be released the former thunder god, Thor Odinson, is show to be flying about, but not with Mjolnir, which at this point has suffered a tragic fate at the hands of his sister, Hela, and lay in pieces, presumably in Norway.

His current mode of travel is actually a throwback to his legendary method of traversing the Nine Realms when he was a young thunder god without Bifrost privileges.

What exactly happened to Mjolnir?

We have no idea who resurrected Mjolnir, but with a fortune in Uru just lying about, it is presumed someone finds what’s left of the trusty weapon of mass destruction, the giant-killer and mountain-destroying weapon and pieces it back together. With Odin, Freya and the Dwarves of Nidavellir presumed dead, the short list for who could put the hammer back together enough for it to work again is a very short list.

Off the top of my head in the Marvel Cinematic Universe, I would say:

There might be others, but off the top of my head, not many people could pull this off. I guess we will find out soon enough. In the meantime…

What’s all this about goats?

In the meantime, Thor is left without a way to fly, since Stormbreaker doesn’t appear to be enchanted to do so. Let’s face it, it would look pretty weird being swung around Thor’s head like Mjolnir was.

Thus, like they did in the comics when Thor was unworthy of Mjolnir, he was forced to rely on his previous method of transportation which allowed Thor, Loki and the Warriors Three to travel the Nine Worlds without activating the Bifrost, a stylish flying chariot pulled by two enchanted goats.

Yes. two flying goats with bad attitudes and a habit of eating anyone who pissed them off and happened to be mortal. In a nod to the legendary goats, the MCU has recreated the two Norse mythological monsters, Tanngrisnir and Tanngnjóstr which respectively can be translated into teeth-barer and teeth-grinder. With such descriptive names, they are charmers, I am sure of it.

These enchanted beasts were not only capable of flight, but were fierce protectors of Thor and any who rode in his chariot. Hardy, blessed with superhuman strength and durability, they were also immortal, within limits.

To understand those limits, we have to go back in time and reveal a story of Young Thor and Loki as they adventured across the Nine Realms.

Thor, as the god of Thunder traveled between the realms on Thor’s chariot, flying through the sky to the rolling sounds of rumbling thunder. Thor’s arrival was known for miles around because the chariot was capable of shooting sparks and blue lightning from its wheels as it rolled through the sky.

While Tanngrisnir and Tanngnjóstr are Thor’s trusted goats, they can still end up on the dinner table if nothing else is available. This can be read in the saga of Thor’s Journey to Utgard in the Poetic Edda. This quick summation of the heroic Edda can be found here, minus my irreverent commentary

At the beginning of the journey, Thor and his companion Loki decide to stop at a farm in Midgard to stay for the night. The farmer and his family were very poor, and they could not offer any food to Thor, who has been known on more than one occasion to eat an entire ox. (Let it be known, a visitation from Thor was definitely hard on one’s herd.)

Therefore, Thor decided to kill his two goats and cook them for dinner. Everyone was allowed to eat, but only on that condition that they did not break any of the bones, and that they would throw all the bones onto the skin on the floor.

During the meal, the trickster Loki, who is always up to no good, convinces the boy Thjalfi (Old Norse: Þjálfi) to break one of the bones and suck the sweet marrow out. (Sweet, sweet goat marrow. I can understand the appeal.)

The next morning, when Thor brought the skin outside and had revived the goats. (Excuse me? Revived? Was that mouth to mouth or chest compression? Didn’t they mean, raised from the DEAD? Zombie goats? Immortal zombie goats.)

He is said to have noticed that one of them was limping, Thor got furious and demanded to know who had snapped one of the bones.

Thjalfi admitted that it was him, and as a punishment, he and his sister Röskva became the servants of Thor and his family. It is unknown which of the goats was hurt, or if the limping became permanent.

(It is said that Thor recognized Loki was the source of this particular mischief but Thjalfi would acquit himself well upon their journey to Jotenheim and was a faithful servant of the thunder god all of his mortal life.)

Goat cameos, only in the Marvel Cinematic Universe

We are getting to see both Tanngrisnir and Tanngnjóstr in a brief cameo in the thunder god’s latest film, ‘Thor: Love and Thunder’ which features Jane Foster as an incarnation of the Mighty Thor and the menace of Gorr, the God Butcher!

It is sure to bring out all of the screaming anti-Jane Foster comic fans who protested her entire story run in the comics. Those haters aside, Jane Foster was a fine rendition of Thor and gave a necessary boost to what had been a relatively uninteresting saga until that point. Jane Foster as the Mighty Thor was a damn fine run. Yes, I said it. It might make for a decent film, too. We will know soon enough.

Thor: Love and Thunder will be released July 8, 2022 and features: Chris Hemsworth as Thor Odinson, Natalie Portman as Jane Foster and Christian Bale as Gorr, the God-Butcher.

Here’s a link to the latest trailer to ever be released before a film in the Marvel Cinematic Universe:

On “The Event Horizon”: Martin Tays, Author of “Stealing Endeavor”