Showrunners Steve Lightfoot and Paul Zbyszewski are among the first to be force majeured as TV studios begin to realize that show production with a pandemic going on is impossible.

The contracts between TV showrunners Steve Lightfoot (The Punisher) and Paul Zbyszewski (Helstrom) and Marvel Studios have been terminated via a little used force majeur clause in their contracts. These two are among the first in the industry to be furloughed amid the industry-wide shutdown as studios of all sizes begin to see the COVID-19 coronavirus pandemic casting a long shadow over what would normally have been the new production season.

Lightfoot most recently served as showrunner on Netflix’s Marvel drama The Punisher, which was canceled a year ago after a two-season run. Zbyszewski serves as showrunner on the comic book powerhouse’s forthcoming Hulu live-action drama series Helstrom, which was able to wrap physical production before the industry-wide shutdown. Zbyszewski will stay on to wrap up postproduction work on ABC Signature Studios- and Marvel-produced Helstrom, starring Tom Austen.

While Lightfoot had a brief time with Marvel working on The Punisher, Zbyszewski’s time with the company dates back to ABC’s Agents of SHIELD. The latter was Marvel’s first-ever live-action scripted original. SHIELD, which returns for its final season next month, was, like Helstrom, developed by former Marvel TV head Jeph Loeb. Marvel’s TV unit was folded into the Marvel Studios division overseen by features kingpin Kevin Feige. Of Loeb’s previous Marvel TV efforts, only Helstrom and two animated shows, MODOK and Hit Monkey, remain. Feige’s TV push for Marvel has focused instead on spinoffs of MCU features for streamer Disney+.

A force majeure clause in a contract typically allows studios increased latitude to make decisions that are motivated by an unforeseeable incident, such as the novel coronavirus. Many in the industry were bracing for a wave of overall deals to be force majeured if the Writers Guild and studios failed to reach a new agreement. During the work stoppage amid the 2007-08 writers’ strike, studios terminated a number of contracts for their less prolific writers. The decision to terminate Zbyszewski and Lightfoot’s deals arrives as many industry watchdogs are anticipating studios big and small to begin invoking the force majeure clause in multiple pacts.

There are only several hundred thousand people in the entire entertainment industry worldwide. The global coronavirus pandemic has already hit the entertainment industry hard, with a huge swath of them already unemployed. Marvel is not alone in seeing its productions delayed, pushed back or releases canceled entirely as production capacity remains unavailable, and theaters around the planet remaining largely closed. 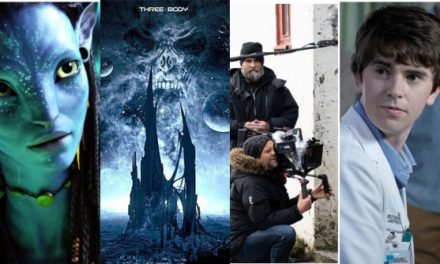 Genre Production in a COVID-19 World

Earth is targeted by a previously undiscovered asteroid storm who want to plug us into a power grid and use us as living batteries and cannot be destroyed by crowd of people with pitchforks and torches , but scientists create a new weapon which does not work and then they kill us all.
The End.
Loading Comments...
%d bloggers like this: