REVIEW: Star Wars Resistance “The Recruit” and “The Triple Dark”

Last Friday, I had the opportunity to attend a screening of the double-header pilot episode of Star Wars Resistance, “The Recruit,” followed by “The Triple Dark” at Lucasfilm’s main office in San Francisco, CA. The atmosphere was one of eager anticipation, with the crew mingling and a few fans already cosplaying new characters from the show, everyone excited to be the first to glimpse the next chapter in the Star Wars animated canon.

To put it simply, the show delivered. From the opening scene of “The Recruit,” which thrusts us immediately into a short skirmish between the New Republic and a lone First Order operative before introducing us to familiar faces from the movies who will be key to protagonist Kazuda “Kaz” Xiono’s growth, the show is less a supplement to the cinematic saga and more a wholly new story.

Even aside from the drastically different anime-inspired cel-shaded look of the show, perfected by veteran Star Wars animation art director Amy Beth Christenson and heavily informed by Robotech and Avatar: The Last Airbender, the visual language of Star Wars Resistance is further-removed from that of the films than its predecessors. While The Clone Wars and Star Wars Rebels showed us new sides of familiar conflicts, Resistance’s world of hotshot racing pilots and tireless pit crews isn’t something we’ve ever seen in a substantial way.

The anime style permeates the action, particularly during dogfight and racing sequences, and although I was initially unhappy about cel-shading in Star Wars, after watching the show, I can’t imagine it any other way. Although it’s a fresh and different visual for Star Wars, that’s not to say it lacks a familiar Star Wars feel. One of my nerdiest criticisms of the new trilogy is that while it’s rich in new creatures, familiar aliens like Nikto and Twi’leks would be nice. In Resistance, there’s new species like a Crolute and a Frigosian right alongside Rodians and Ithorians. It’s a minor touch in the grand scheme of things, but it keeps the Star Wars feel. Some familiar artifacts of previous Lucasfilm Animation projects make appearances hanging on walls or on shelves in the background, reminding us that it’s all one big galaxy.

Another aspect I was not necessarily expecting was the context it gives The Force Awakens and The Last Jedi in terms of the political situation. Without saying too much, I can promise that very early on, we get a look at the New Republic in action, learn how they help the Resistance, how much the average person knows about the Resistance at this time, and how the First Order managed to spread its influence across the Outer Rim. This show seems like it will expand the sequel trilogy in the same way The Clone Wars adds weight and meaning to the prequels.

Any Star Wars story is only as good as its original characters, especially when so few familiar faces return. Besides some quick cameos, it’s really only BB-8, Poe, Phasma, and Leia returning so far, much like Season One of Rebels was light on the familiar faces so we could bond with its core cast. While Rebels had its core ensemble in place by the end of the first episode, three episodes into Resistance, we still haven’t even seen everyone who’s been featured in pre-release bonus featurettes speak, including Hype Fazon, Griff Halloran, and other highly-anticipated characters. This is not a negative, though; the show’s first season will have 22 episodes to Rebels’ 13, according to executive producer Athena Portillo, and this slower burn gives us more time to meet everyone in Kaz’s new world rather than overloading us with the 13 (!) new characters we’ve seen in sneak peeks so far.

Although early on, Kaz Xiono (portrayed by Christopher Sean) seems to be a rehash of Ezra Bridger in many ways, a dorky, naive young hero learning what heroism means, his family background differs, as does his motivation for joining the larger movement, and supervising director Justin Ridge promised at a panel after the screening that his relationship with his father will be a powerful thread moving forward, setting him apart from Ezra even further. Star Wars has always relied on themes of family. Resistance explores these in a new light through Kaz and his father, asking what it means when your beliefs and goals differ substantially from your elders. It’s a question we ask at all stages of our life, and Resistance manages to present it in a way that’s palatable to younger viewers while incredibly relatable to anyone.

Poe Dameron (Oscar Isaac, naturally), probably a decade or so older than Kaz, functions as his introduction to the Resistance and to the world of the Colossus refueling station, the primary setting of Season One, as well as a familiar face to bring the audience into this story. His inclusion is not forced, and it’s interesting to see brash, headstrong, impulsive Poe thrust into a mentorship role after his clashes with his own superiors in The Last Jedi.

Among the supporting cast, the adorably, painfully literal mechanic Neeku Vozo (Josh Brener) is emerging as an early favorite, the comic relief of the series. Everything everyone around him says is always both literal and honest, or so he believes, but rather than being a simple one-off joke, this humor is woven into the plot, occasionally driving it. Much of this humor, producers explained after the screening, comes from Josh Brener’s knack for improvisation. Neeku will be a fan-favorite in the vein of Hondo Ohnaka.

Neeku’s colleagues, the grouchy astromech droid Bucket and the no-nonsense Tam Ryvora (Suzie McGrath) are less developed thus far. I worry that Bucket will prove to be a virtual clone of Chopper from Star Wars Rebels. He did little of consequence in the first few episodes, and while he’s a bit more violent than Chopper, there’s little to set him apart. The concept of a cantankerous astromech was fresh and unique in Rebels, and I hope it doesn’t become a tired trope of Star Wars. Ryvora, meanwhile, is strong and reserved but the most assertive of Team Fireball, the core crew of the show, and the producers teased that her character will evolve quite a bit over the course of the season as we approach the open conflict with the First Order. She doesn’t play a huge role in these episodes, but is billed second on most press materials and seems poised to become a Star Wars icon over the course of the next few months.

Jarek Yeager (Scott Lawrence), the retired Rebel pilot leader of Team Fireball, clearly has a history with Poe. It’s not explored this early on, but one of the aspects of the show I am most looking forward to is Poe’s inevitable attempt to bring the reluctant Yeager back into the fight. At the onset of the show, he believes the Empire to be gone forever. His growth as he inevitably realizes how wrong he is is going to be a powerful thread throughout the season.

Of the Aces, the squadron who defends against pirates, we really only get to know Torra Doza (Myrna Velasco) in the first few episodes. Kaz underestimates her prowess as a racer and a pilot, as do many people. With her father, Captain Imanuel Doza, acting as the leader of the entire station, Torra is likely to compliment and foil the themes of generational clashes embodied by Kaz while being a powerful character in her own right.

The main villain thus far seems to be Major Elrik Vonreg (Lex Lang), an ace of the First Order compared to the Red Baron by series creator Dave Filoni. Vonreg is known to the Resistance as a formidable foe. He differentiates himself from other First Order villains by a combination of a cool head and a ruthless mind, with a willingness and eagerness to take to the front line rather than lead from the safety of Starkiller Base. He’s Thrawn with less inhibitions in a TIE fighter, as far as I can tell thus far. He is not a radical like Hux, but he is willing to work with questionable allies outside of the Order to advance their greater cause. I predict he will clash with Captain Phasma (with Gwendoline Christie making her return) on this.

What all of these characters have in common is their ties to the Colossus, an Outer Rim refueling station on the aquatic planet of Castilon. To perfect the spirit of the Colossus, according to Athena Portillo, Dave Filoni commissioned veteran ILM model-maker Bill George to actually build a physical model of the Colossus for use by creatives and designers on the show. It pays off. While there were early complaints of Lothal feeling sparse or lifeless in Rebels, the Colossus truly feels like a hub of activity. In Aunt Z’s rough-and-tumble bar, in the chaotic marketplace, or in Yeager’s greasy old repair bay, there’s always something happening in the background. Walls are distressed. Ships land and take off. Droids bustle. Merchants haggle. The Colossus is, at once, a fun new world to explore and a dangerous place where no one can truly be trusted. There are echoes of Lothal, Mos Eisley, Cloud City, and other frontier outposts from a galaxy far, far away, but it is on the whole a fresh place for different adventures and new faces. I can’t wait to go back.

The music, by Star Wars newcomer Michael Tavera, makes less use of classic Star Wars themes than Kevin Kiner’s Rebels score and seems to lean on pulse-pounding anime action themes more, but underscores the action well. Classic themes such as Leia’s are quoted at appropriate moments, but Tavera brings a new sound to the galaxy to match the new look.

Be ready to join Kaz and explore the Colossus when Star Wars Resistance makes its debut on the Disney Channel at 10 PM (ET/PT) on October 7 with “The Recruit.” The pilot and two additional episodes, “The Triple Dark” and “Fuel for the Fire,” will be available for streaming October 7 on the DisneyNOW app and on-demand. 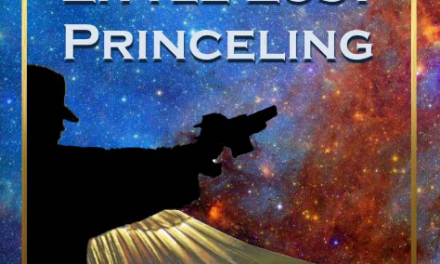