Trailer Park: SDCC 2018 TV Series Trailers All in One Place!

So many trailers came out of San Diego Comic-Con this year.

Rather than post dozens of separate articles about each one of the trailers out of this years’ bumper crop, we decided to put the best of them together into just two, one for movies and one for TV series. This one’s for the television series trailers, and have we got some outstanding stuff to show you.

You’ll probably want to pause the SCIFI.radio music stream while you watch all this stuff.

The first trailer for the new season of Star Trek: Discovery has dropped in conjunction with the exciting and thronging San Diego Comic-con. By contrast to last year’s trailers, it is a wonder to behold.

Captain Christopher Pike, a majestic fixed point in the history of Star Trek established in the first season of the original series, comes to us as the Captain of the U.S.S. Enterprise. Played by new Trek actor Anson Mount He comes to Discovery to take command, to help the Federation assess a new mystery. Is it a threat? A greeting? Whatever it is, Commander Michael Burnham’s step-brother Spock is intimately tied to it. Yes, Spock will be making an appearance in Season 2. No, at the moment nobody knows who it’s going to be. Our money is on Zachary Quinto, because he did such a fantastic job portraying the character in the recent movies. We do know that Rebecca Romjin has been cast as Number One, 2nd in command of the Federation Starship Enterprise, opposite Anson Mount’s Captain Pike.

Anson Mount makes a fantastic looking starship captain, and seems to be channeling his inner Kirk. He’s smooth, charming, and has a commanding presence. We instantly accept him as worthy of that command chair. And for once, it looks like the writing team for Discovery is not pushing the Easy Button.  What we’re seeing instead is the spirit of the original Star Trek, an adventure series that puts us all on the edge of the Final Frontier, and on the edge of our seats. The sense of wonder is finally here, standing on the deck and reaching out to shake our hand. Somehow they have tapped into whatever mystical source of mana it was that gives Star Trek that spirit of — dare I say it? — Enterprise.

Because the new series won’t debut until January of 2019, they’re going to be making a series of Trek short subjects to keep everybody’s attention until they can reach the finish line. That’s one of the drawbacks of doing motion picture feature quality work on a TV show: it takes the same time a feature would take.

Seth Macfarlane’s amazing series The Orville is back for another season! The trailer dropped over this past San Diego Comic-con weekend, and the show really seems to have hit stride.

The spirit of adventure, the oddly shaped starship, the Planetary Union, and all the stuff we go to a space adventure series for, it’s all back, and it’s large and in charge. This time, though, Macfarlane says that this is the authentic version of the show he always intended. Fox Television had tried branding it as just another Seth Macfarlane comedy, and this clearly, clearly, was not in the best interests of the show. It didn’t help that Macfarlane actually was trying to blend comedy and science fiction, which is often a difficult thing to make work.

“This show was a tonal experiment of sorts,” MacFarlane said. “Comedy and sci-fi when you blend them together, they don’t always mix well. In features they do, but television is kind of hard to sustain. The pleasant surprise for me was that fans and viewers were willing to let us tell a story. They weren’t waiting for the next joke to come.”

MacFarlane said “different stories call for different tones,” just like life has different tones, and the comedy in “The Orville” was always meant as a “garnish” more than the main course. To that end, he said early advertisements for the hourlong series weren’t in line with the final product.

“Initially, I think the show was a little misrepresented,” MacFarlane said. “It was marketed as a comedy… I’m not sure why. Maybe there was a worry this was so new and weird and different it wouldn’t land.”

The new season makes its debut December 30, 2018, a few weeks earlier than the Star Trek: Discovery new season’s release behind the CBS All Access paywall. Unlike ST:D, though, everyone will be able to see The Orville.

“The Mutant Age Starts Now” on September 25, 2018, picking up half a year after the events of the first season finale. “A hard time is coming for mutants” but aren’t they always? Stay tuned.

Matt Groening’s latest creation is Disenchantment, the story of an alcoholic princess named Bean, a sidekick named Elfo (who is actually an elf), and her personal demon Luci. They all live in the fantasy medieval kingdom known as Dreamland.

The timing for this new show couldn’t be better. It’s Groening’s first series for Netflix, and it takes every familiar fantasy trope out behind the woodshed for a good old fashioned thrashing. It stars Abbi Jacobson as Princess Bean,
Nat Faxon as Elfo, Eric Andre as Luci, and John DiMaggio as King Zög, and the entire first season hits Netflix on August 17.

The thrilling and terrifying journey of the Winchester brothers continues as Supernatural enters its thirteenth season. Sam and Dean have spent their lives on the road, battling supernatural threats that include everything from the demon that killed their mother to the usual vampires, ghosts, shape-shifters, angels and fallen gods rampaging over the land. They’ve come out on top with the help of allies, both human and supernatural, but every victory comes at a price.

The abrupt cancellation of Young Justice in the spring of 2013 was met with dismay from the fans, especially after it was learned that the replacement Teen Titans show, Teen Titans Go! was going to be aimed at the twelve-and-under audience. The cancellation coincided with the deeply popular Green Lantern: The Animated Series, and both were canceled before either were able to wrap up their storylines.

At least one of these tragedies has now been resolved. Young Justice has been resurrected and there is now a Season 3 of the show being prepared for airing on the new DC Unlimited streaming service.

The show starts sometime early 2019, but we don’t have a release date. Neither, apparently, does DC Universe.

The teaser is classic Zim, and it was presented at the end of the San Diego Comic-Con panel featureing the cast and crew.

Enter the Florpus! reunites fans with characters like Zim, the alien invader whose quest to conquer Earth is tripped up by his own stupidity; Dib, his mystery-obsessed classmate and arch-nemesis; and the extremely dumb and extremely adorable Gir, obviously. All three of them appear in the teaser, with slightly updated appearances to account for all the time that’s passed.

The trailer for the new DC Universe series Titans also dropped this weekend, to the puzzlement of fans. Most fans are saying that it’s stylistically too dark, and few are fans of Starfire’s Beverly Hills mall rat costuming.

And then there’s Dick Grayson’s F-bomb, which is why we have to caution you that this one trailer, unlike everything else we’re showing you today, is NOT SAFE FOR WORK.

There’s no set date for the release of the series, but it will coincide with the debut of the DC Universe streaming service some time early in 2019.

The Maid of Might (remember when they called her that? It’s been a while) is back for another season. Aliens are the focus, being blamed for everything that’s going wrong with our world, and the xenophobes are targetting the good guys along with the bad guys. Watch all the way to the end for a neat Supergirl reveal as Melissa Benoist rocks a Kryptonian battlesuit.

The new season of Supergirl premieres on the CW on Sunday, October 14, 2018.

When you mess with time travel, even once, the trouble never stops. This time, trouble’s name is Nora Allen, Barry and Iris’ daughter, from the future. Barry knows it’s not going to go well, and uses “Marty McFly” as a verb.

These people are having waaaay too much fun making this series.
More magic, more dragons, same misfits. John Constantine brings enchantment in a version that comic book purists are going to love.

The season premiere is Monday, October 22. We have to ask, though, what in the blazes is up with the giant huggy blue love puppy? Seeing that in the middle of the trailer was pretty jarring. We saw that, and said to ourselves, “waaaait, that can’t be right….”

On ‘The Event Horizon’: Gregory & Steve MacMartin, Creators of ‘Consortium: The Tower Prophecy’ 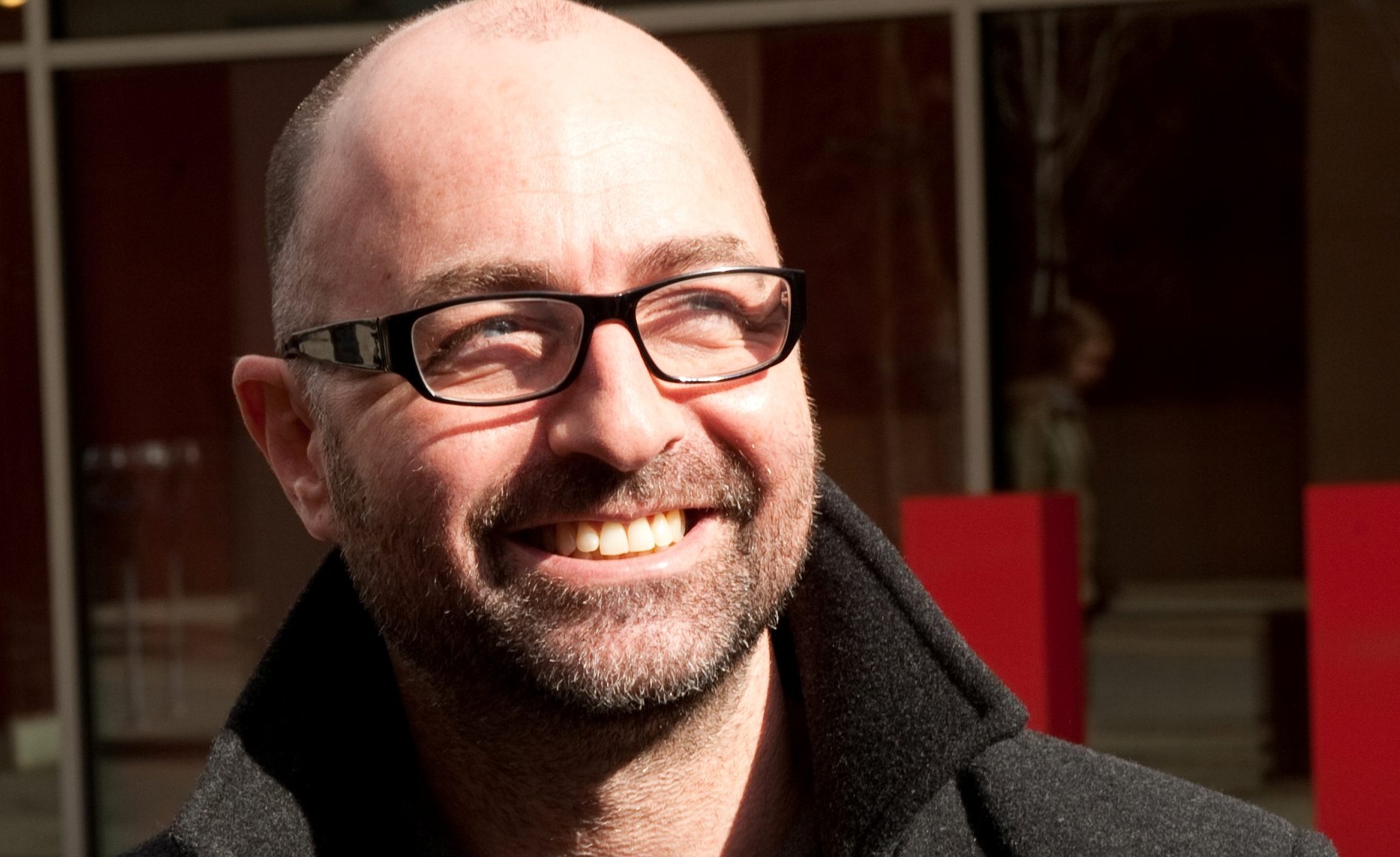 On ‘The Event Horizon’: Simon Barry, Creator/Producer of ‘Continuum’