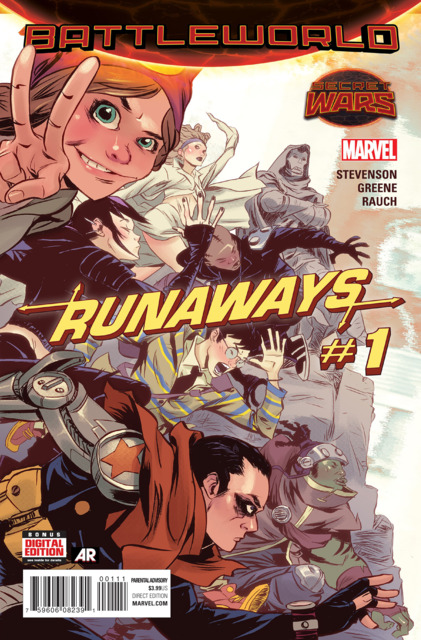 Late getting your stash from your file? You’re not alone. So here is the Week Behind Edition of 4CB.

Brian K. Vaughan’s original Runaways saga, about a group of kids who discover that their parents are actually alien super-villains and go on the run, was a great work of storytelling, but after he left the book, it looked like the gang was going to be tossed into that lonely world of yearly tie-ins and periodic one-shots. The characters are rife with potential, and so many stories have yet to be told. Enter writer Noelle Stevenson, who is no stranger to writing quirky, plucky, and weird teenagers, as evidenced by her book Lumberjanes.

Stevenson has the unenviable task of introducing the reader to a whole lot of information in a short amount of time. And having this series set on Battleworld during the current Secret Wars event only makes it a little bit tougher. But she pulls it off nicely, introducing Battleworld’s version of a school for gifted youngsters, where those who graduate join the Doom Elite. Stevenson shows off an eclectic collection of snobs, freaks,and misfits, and each one stands out. Stevenson gives no cookie cutter characters, here. And Molly Hayes …? My favorite. She’s freakin’ awesome.

There’s not a lot of action, here, but what there is is hilarious and vibrant, thanks to artist Sanford Greene. Greene has a sense of comedic timing in a medium that, like horror, is tough to convey. And along with John Rauch’s colors, Stevenson and Greene have managed to create a teen drama that keeps the drama and adds some comedy, without coming off as whimsical or, to coin a word, pubertarian. Whatever becomes of this book after Secret Wars is over, I hope this creative team doesn’t run away from it.

IDW keeps going for the wacky when it comes to the Ghostbusters. Once, they were trapped in Limbo. Last year, they teamed up with the Teenage Mutant Ninja Turtles. Now, the boys in gray are teaming up with the boys in multicolor. IDW’s Ghostbusters, who feature the team directly from the movies as a comic book-styled sequel, meet the 1980s The Real Ghostbusters in the four-part mini-series Ghostbusters: Get Real.

In a nutshell, the elder god Proteus causes a bit of chaos in the New York City of The Real Ghostbusters. But just when the Ghostbusters are about to get busted themselves, some timely intervention from a magical ally whisks the team out of danger, and into the universe of IDW’s Ghostbusters. But Proteus isn’t giving up so easily. Seeing these characters interact with IDW’s characters was great fun, as Venkman and Venkman seem to compete for the title of Wittiest Ghostbuster of the Multiverse.

I dig Erik Burnham and Dan Schoening, like, to the moon. Just when you think they’ve done their best work, they continue to surprise you. What’s amazing is Schoening’s completely different character designs. His IDW Ghostbusters look the same as always, and his Real Ghostbusters art looks like animation cels. The likenesses are that good.

The downside is that it’s not reader friendly. It ties into the now-cancelled ongoing series, as well as the GB/TMNT crossover from last year, and may be confusing. The upside is that it’s a crazy fun comic and I can’t wait to see how it plays out.

Superman: 8 Decades of Truth, Justice, and the American Way 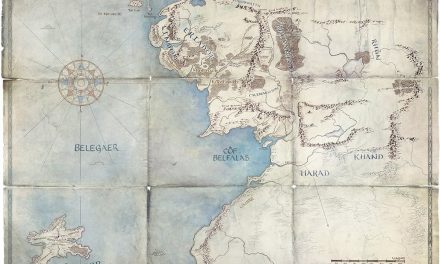