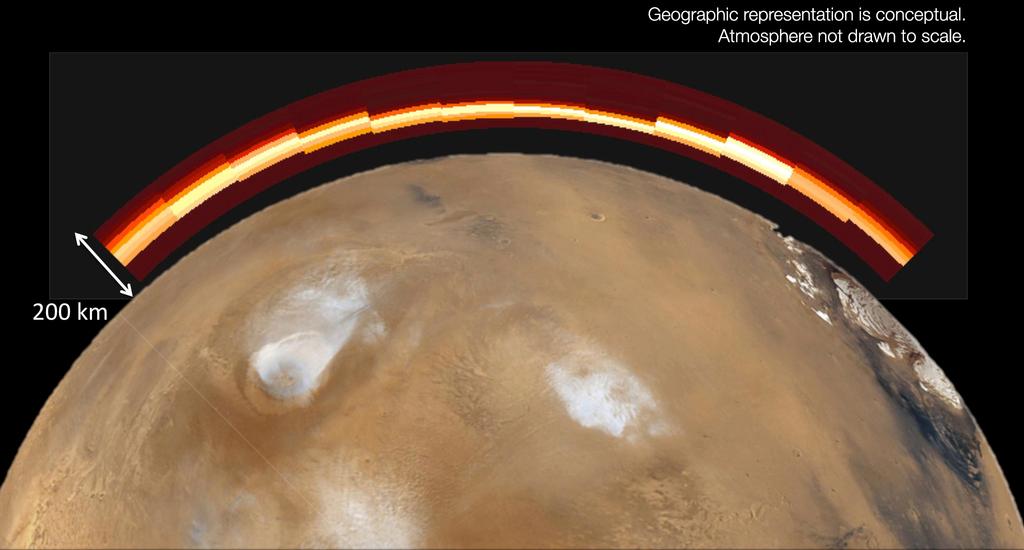 HiRISE images, distances ranging from 86k to 93k miles away from the comet nucleus. Each pixel covers an area from about 450 to 580 feet. The scale bar on each image is 0.62 mile. Image courtesy of NASA

This morning, NASA held a press briefing to reveal some of the findings from their analysis of all the data collected during the close-pass of the Siding Spring Comet by Mars on October 19, 2014. Though the event was meticulously planned in advance, and the likeliest conditions were modeled over and over, scientists still got a few surprises!

Alan Delamere, the co-investigator for Mars Reconnaissance Orbiter’s HiRISE (High Resolution Imaging Science Experiment) camera explained, “Twelve days before the event, the HiRISE camera started photographing comet, comparing images, and the team came to the frantic realization that [there was a problem with the camera’s position relative to the comet]. We only had a few days to come up with a correction to the trajectory, and we ended up with perfect tracking.”

HiRISE took images of the comet itself, which revealed that the nucleus is smaller than expected: about 1.2 miles (2 kilometers). The HiRISE images also indicate a rotation period for the nucleus of eight hours, which is consistent with the preliminary observations made by the Hubble Space Telescope.

Another surprise the teams encountered could have had nasty consequences if not for cautious “over”planning. Jim Green, NASA’s Planetary Science Division director said, “We had modeled the comet dust environment extensively, and we didn’t expect the comet dust to interfere with our space craft at all, but I’m really glad that we hid them safely on the other side of the planet. I think that really saved them. With the amount of dust (particles up to a cm in size) that came in, it’s very possible that that could have caused serious damage to the space craft.

What the Martian atmosphere would have looked like to a viewer with ultraviolet-seeing eyes during and shortly after a meteor shower. Graphic courtesy of NASA

“We had three teams monitoring, taking observations, and modeling the dust environment, looking at trajectory analysis: all this suggested that Mars would miss the [comet’s] dust tail. The dust tail, in reality, seemed to be larger than expected, and the comet wasn’t quite in the same position as we thought it would be. The surprise was that we ended up with a lot more dust than we ever anticipated.”

A lot more dust, indeed! Nick Schneider, instrument lead for MAVEN’s Imaging Ultraviolet Spectrograph said, “A preliminary estimate is that a few tons of comet dust were deposited. The meteor shower must have had thousands of meteors per hour the night after the comet pass. It made a new, temporary layer in the [Martian] ionosphere. These emissions endured for a few hours, but faded over the next few days.”

Green added, “The comet’s dust slammed into the upper atmosphere of Mars, actually changing its chemistry.” The Martian ionosphere was flooded with ionized magnesium and iron after the comet’s passing.

The MRO’s Shallow Subsurface Radar (SHARAD) also detected the enhanced ionosphere. Images from the instrument were smeared by the passage of the radar signals through the temporary ion layer created by the comet’s dust. SHARAD scientists used this smearing to determine that the electron density of the ionosphere on the planet’s night side, where the observations were made, was five to 10 times higher than usual.

MRO’s Compact Reconnaissance Imaging Spectrometer for Mars (CRISM) searched for signs of any particular chemical constituents stood out in its spectrum. Team members said the spectrum appears to show a dusty comet with no strong emission lines at their instrument’s sensitivity. CRISM’s findings did produce one little surprise: just before the comet’s closest approach, CRISM captured an image where the comet is slightly red on one side, slightly blue on the other, which probably means that we’ve got different substances on either side of the comet.

Delemere who also studied Halley’s Comet, added, “Halley had exactly the same solar angle as Siding Spring … With Halley, we were able to see the outline of the nucleus against the coma. We were hoping to see the same here, but it’s not. We’ve got a lot more studying to do of these images to separate the nucleus from the coma.”

On the surface, the Opportunity Rover did have a chance to see the comet, and grab a few images. They’re still looking at the Curiosity data. Green explained, “the Mars atmosphere had a fair amount of dust in the mid-region, it caused a scattering of light. We’re continuing to do data analysis and to publish those results.”

Of course, the one question everyone at the briefing wanted an answer to, was one of the hardest to answer: What would the meteor shower that occurred after the comet’s passing have looked like from the surface of Mars? One the one hand, there were thousands of meteors falling per hour. One the other hand, those meteors would not have looked like falling meteors we see from Earth’s surface. These meteors mostly measured in microns, though the team said there may have been some as large as a centimeter. So, they suggested, it might have seemed like more of a glow than what we would picture as a meteor shower. Also, because the dust contained a great deal of sodium, it’s likely that the whole scene would have had a yellow glow, like the street lights used in fog-prone areas here on Earth.

There’s lots more analysis and comparison to be done with all of the data captured during this event, but it’s exciting to have a taste of what is being learned! We’ll keep you posted on new discoveries!

First Object Teleported into Orbit? Not So Fast (But Still Cool)