If you were to pick a venue that complimented the amazing Automatons of Steam Powered Giraffe (ostensibly built in 1896 or thereabouts) then the RMS Queen Mary (built in 1936) is a pretty good choice. Atmosphere and Art abounded. This year’s HRM Steampunk Symposium  had some wonderful events booked, including Steam Powered Giraffe, Abney Park, and Lee Presson and the Nails, just to name a few.

I arrived in the hall early for the SPG concert and watched the crews set up twice: once for SPG and once for Lee Presson. A tremendous amount of work goes into an SPG concert. Considering the wide variety of instruments, back drops, all the audio and lighting cues, smoke, and sound effects, my hat is off to Steve Negrete and the SPG crew. They work extremely hard and their days are very long. Each time I’ve been to their concerts, they’ve always had first rate tech and sound with never an issue, and that’s saying something.

As is typical for an SPG concert, there were long lines of avid fans. In fact, the fans and their amazing costumes add a great deal to the fun of an SPG concert. Truly, these fans are a warm and friendly bunch, very creative and amazingly inventive. The wonderfully dressed SPG fans were in high form this evening, boosted by the addition of the extensive costuming evident from the Steampunk Symposium.

While the waiting line snaked around the vintage decks of the Queen Mary, various members of the band would sneak out to play with the crowd, to the delighted squeals of fan-girls and boys of all ages. As the elegant old hall filled to capacity, the fans were treated to more photo-ops with the band. A  very fun team of stylish, sharp-dealing magicians worked the crowds as people filled up the seats. After a rousing introduction by the charismatic Thee Bluebeard, the concert was truly underway.

Watching the Automatons go through their obligatory power-up cycle, it was immediately obvious that 2014 meant some new upgrades for Steam Powered Giraffe. Spine now has six metal fins, roughly reminiscent of a metal stegosaurus. Not to be outdone, Rabbit is now a femme automaton. Rabbit’s new look is very colorful. Gone is the coachmen’s hat, replaced by a profusion of red and black dreadlocks of shiny coils. Rabbit’s coif is complimented by two metallic bronze ears. Now in a black dress, with red and black striped stockings, Rabbit is every bit as elegant and manic as before, but a bit more colorful. The audience took the gender upgrades in stride and gave the band a roar of approval of the new look as the band started their act.

The concert started with its customary challenges. Bee-Bop the AI that runs the start up sequence forced Steve Negreti, the sound man, to admit that it was in fact “the most amazing AI in the whole universe ever” before starting up the Automatons. They opened with “Steamboat Shenanigans,” and in the footlights, Rabbit’s new red and black leggings blazed.

Hatchworth had some technical issues involving some smoke. In fact, all the Automatons seem to be given to a bit of smoking these days—oil, not cigarettes. The song brought the amazing Mike Reed’s instrumental talents forward and had a lot of lovely “blue-grass-esque” picking involved. We were then treated to some rather hilarious imitations of Spine by Rabbit. Spine has a distinctive deep voice, and it was readily apparent that Rabbit (aka Bunny Bennett, real life brother of David Michael Bennett) had the Spine nailed and mocked him beautifully. The crowd loved it.

During the interplay between songs, Rabbit asked Spine, “What happens when we die?” Just as the response is coming from Spine and Hatchworth, Bee-Bop the AI shuts the team down and Walter Girl Paige (in the striking blue and white outfit) was deployed with a duster.

More onstage hijinks followed, and Hatchworth discovered an immediate hate/attraction to the red shoes of one of the fans in the front row. A vote was offered to the audience on the expulsion of the dreaded red shoes (and the lovely young lady in black evening dress and pearls attached to them). Hatchworth was rebuffed, which segued into the song “Fancy Shoes” (also from “MKIII”). I later asked the young lady if she knew that she was going to be involved in the skit, and she laughed and told me it was all totally improv, to her delight.

After another deep question was asked (“What is the meaning of Life?”), Hatchworth had a smoky meltdown and a second shutdown sequence ensued, with the deployment of Walter Girl Carolina using some sort of ratchet gun that tightens the bots. In one of the few nods to the new features, when Rabbit is torqued up a little too aggressively, she blurts out, “Hey! Buy lady a drink first!” which met with a lot of laughter.

There was a serious discussion on stage as to who was cooler: Rex Marksley (Cowboy) or Captain Albert Alexander (Sailor). Rabbit disappeared offstage and returned shortly without her robo-dreads but with the big Captain’s hat. I was close to the stage and got to see the details of Bunny’s amazing physical mime and improv. She was on her game that night, physically illustrating the song fluidly and with a great sense of humor and audience awareness. I loved the bit where she actually “eats history.” None of the three is a  slouch in the mime department, as they demonstrated in an impromptu imaginary bar fight.

After the song, Rabbit was re-deployed with her brass ears, and she had the audience laughing as she pulled on her hair with a sproing! Later on another episode of mechanical failure leads to the Walter Girls having fun by re-posing the powered down Automatons that was pretty funny.

All through the night, Spine did a fantastic job of providing the foundation for the harmonies with his amazing voice and doing a great job as the straight man for the rest of the team. One good thing about his silver make up is it makes his raised eyebrows and looks of disbelief easily readable, which adds a great deal to the comedy. One of the local instigators, “Bear” in a furry sash, had great fun getting members of the audience up on their feet and dancing around in a steampunk conga line—just like a regular conga line, but cooler and with more metallic hair.

Both Spine and Rabbit pulled up those great vocal riffs in  “Automatonic Electronic Harmonics,” and then, of course, their signature tune (and very fitting considering the venue) “Brass Goggles.” The last song also featured a kick metallic ARSE drum solo by Matt Smith, which had the crowd jumping.

My only complaint is that I wanted to hear Spine’s version of “Diamonds” (a Rihanna cover) and the G.G. the Giraffe puppet which I’ve had many friends say they enjoy even more than the original. As far as the newly equipped femme version of Rabbit, the audience was hugely supportive, and the concert just went on as usual, which is to say, awesomely.

You can check out their website and calendar for event information. It looks like their next big concert is at the historic Everett Theater, in Everett Washington, January 31 and February 1, 2014.

I would recommend getting tickets online, and early, as the venue will likely sell out and SPG is on a roll! 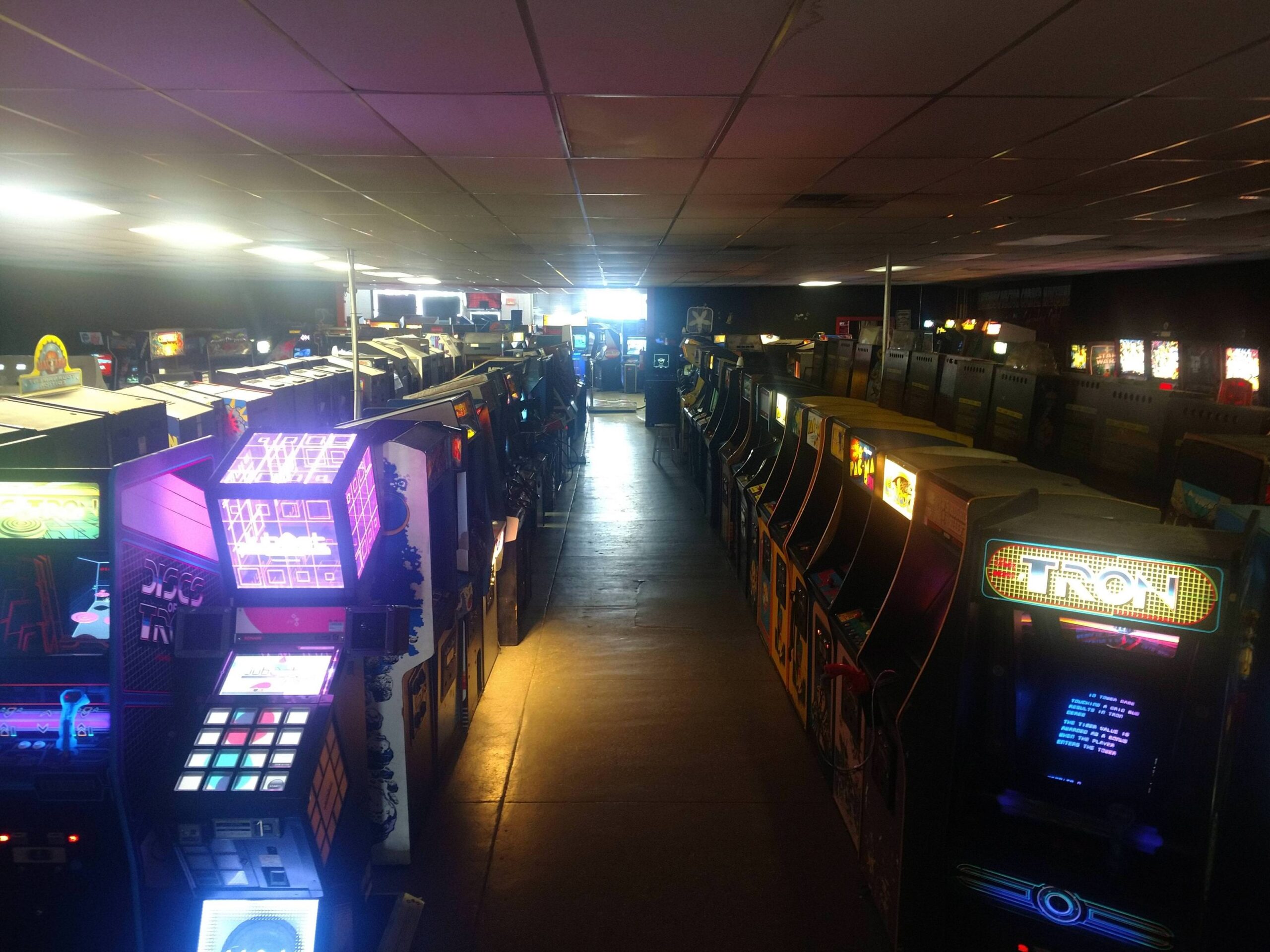 Step Back in Time to Game Galaxy in Smyrna, TN

After 41 Years, “Emmet Otter’s Jug-Band Christmas” Debuts on the Big Screen AND on CD

Earth is targeted by a previously undiscovered asteroid storm who perceive us only as a food and eat us all.
The End.
Loading Comments...
%d bloggers like this: